All players are Deputies helping Marshal Simon FRy to track down a band of outlaws. The Deputies trail them to the various hideouts on horseback. The MOst successful Deputy wears the "Deputy Marshal" badge until someone else scores higher.

TO BEGIN THE GAME 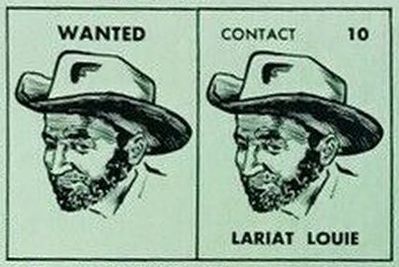 Also, there are 12 "No Clue" cards.
2. Shuffle all the cards and deal them face down, four in each of the 6 Hideout Circles on the playing board.
3. Choose a playing piece to be your Deputy. Player spinning the highest number on the dial, plays first.

THE OBJECT OF THE GAME

is to win the badge by scoring the most points when locating and capturing the outlaws. This is done by first locating a "Wanted" card and then finding a matching "Contact" card so that a capture can be made.

1. All Deputies start from the Marshal's office, and in turn by spins of the dial, follow any trail toward a Hideout Circle, counting each horseshoe as one space.
2. Deputies may change trails but only at intersections. Also they may move forward or backward at any time but not in the same turn and except in Rule No. 3 under "To Capture".
3. Any number of Deputies may be in a Hideout Circle at the same lime.
4. A Deputy enters a Hideout Circle at the Red Triangle by an exact spin or more, immediately examines the top card (secretly), and does one of the following:
a. If it is a "No Clue" card, he places it at the bottom of the pile in that Circle.
b. If it is a "WANTED" outlaw card, he keeps it face down in front of him.
c. If it is a "CONTACT" outlaw card, he remembers where it is, but places it at the bottom of the pile unless he has its matching "WANTED" card. (Then see rules on "TO CAPTURE".)
5. A Deputy may stay in a Circle and examine all of the cards there, one in a turn, or he may travei to another Circle if he chooses.
6. When a Deputy has a "WANTED" card he then searches for a matching "CONTACT" card in order to make a capture. However, he may pick up other "WANTED" cards in his travels.
7. When two Deputies meet on a trail, or on the rim of a rope hideout Circle by an exact count, they must show their "WANTED" cards to each other. This gives both players the right to capture these outlaws. (Care should be taken to remember these "WANTED" cards.) However, Deputies inside a Circle are not required to show their cards.

TO CAPTURE AN OUTLAW

A. Deputy finding a matching "CONTACT" card:
1. Turns it face up in that Circle and immediately places his playing piece on the Red Triangle on the rim of that Circle.
2. Turns the matching "WANTED" card face up in front of him.
3. On next turn, he travels clockwise around the Circle counting each knot and loop as one space until he stops by an exact count on one of the 3 loops (X), where he fights with the outlaw.
4. He then immediately spins the dial again and if it stops on a WIN picture, the outlaw is captured. The Deputy picks up the "CONTACT" card, and the matching "WANTED" card, and keeps them for scoring. He then starts again at the Marshal's office.
5. If the spinner stops on a LOSE picture, the outlaw escapes and is still at large. THIS OUTLAW "CONTACT" CARD AND All THE CARDS FACE DOWN IN THE CIRCLES ARE COLLECTED, SHUFFLED, AND REDEALT AGAIN FACE DOWN IN THE CIRCLES. The Matching "WANTED" card is placed face up in the Marshal's Office and this escaped outlaw may now be captured by any Deputy.
6. The number of points on a "CONTACT'' card DOUBLES each time that outlaw escapes. The Deputy capturing the outlaw scores all these points.

B. OTHER DEPUTIES: when a "CONTACT" card has been turned up in a Circle other Deputies may:
1. Enter the same Circle and look for other cards.
2. Or if he has the right to capture the outlaw, he also may try to do so.
3. Or if he does not yet have the right to capture that outlaw he may travel in EITHER DIRECTION on the rim to meet another Deputy as in Rule 7 of TO PLAY, and then join in the capture.
C. If a player makes a mistake by matching the wrong "CONTACT" card with a "WANTED" card, the "CONTACT" cord is replaced at the bottom of the pile, and his Deputy must be placed at "Start" immediately and proceeds from there on his next turn.

The game ends when all outlaws are captured. The player with the most points WINS THE GAME and wears the "Deputy Marshal" badge during the next game.