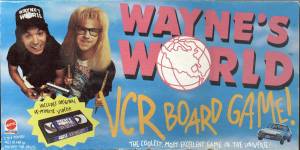 To be the first player to reach: Party Central

Ģ Sit at a table in front of a VCR - equipped television set. Make sure that everyone can see the screen.

Ģ Open the game board and place it on the table within easy reach of all players.

Ģ Put the globe playing piece bases and the playing piece tops (guitar, drumsticks, hat and Mirth Mobile) into the box lid. Without looking, everyone pick a base and a top combination. Players then push the tops into the bases and place their pieces on a matching color corner 1 space.

Ģ Shuffle the PARTY ON! and POP QUIZ cards and place the decks off the game board, face down, within easy reach of all players.

Ģ Place the circular PARTY MAKERS face down inside PARTY CENTRAL space on the game board.

Ģ Put string through the BACKSTAGE PASSES so players will be able to wear them. String is not included.

Ģ Place the BABE/HUNK pieces, BACKSTAGE PASSES and the GREY POUPON jar off the board, within easy reach of all players.

Ģ Each player should make no less than 10 ōtrash pucksö from scrap paper, not new paper. Always recycle ōtrash pucksö as you would recycle your hurl! Save a trees Hint: DonÆt use lightweight newspaper. The heavier the paper stock, the better. Keep the ōtrash pucksö close by your throwing hand.

Ģ Set up the box and lid to make a goal as illustrated below. Place it about 15 feet away from all players. The top of the tv set may be a good spot. Another option is to put it on a chair.

The game is played along with the enclosed video cassette. If a player does not win the 45 minute game before the tape ends, Garth wins.

Take turns moving around the board. Moves are directed by using the spinner and moving the number of spaces indicated -- always in the direction of the arrows -- or by going wherever Wayne and Garth tell you to move.

If a space is occupied, always move to the next unoccupied space. No two players may occupy the same space except for these exceptions: TICKET GATE; BABEITUDE ZONE; and MONKEY SPACE.

The tape must run without interruption once it is started, so itÆs very important to finish reading the rules to know what happens on different game board spaces.

THE BOARD, ITS SPACES AND PLACES

Here is what the various spaces mean. Check them off this list with a pencil after you have read about them and know where they are on the game board.

Ģ TICKET GATE SPACE: Take a BACKSTAGE PASS (if you donÆt have one) and wear it around your neck. No one can take this away from you once you earn it. One per player.

Ģ PICTURE OF PLAYING PIECE SPACES: If you land on a space that has a drawing of your playing piece, give a PARTY MAKER (if you have one) to the player of your choice.

Ģ COLOR OF PLAYING PIECE SPACES: If you land on a space the same color as your playing piece base, take a PARTY MAKER from PARTY CENTRAL.

Note: A player can be given the Grey Poupon jar on any space except PARTY CENTRAL, including the entrance spaces to PARTY CENTRAL.

Ģ PARTY ON! SPACES: If you land here, turn over a PARTY ON! card, read it aloud and do what it says. Used cards are returned to the bottom of the deck.

Ģ GO ANYWHERE SPACES: Do just as it says. This gives you a chance to get a PARTY MAKER, pick-up a BABE/HUNK, obtain a BACKSTAGE PASS or pass the Grey Poupon. Do whatÆs best for you.

Ģ THE BABEITUDE ZONE: This is where you pick up a babe or hunk. If you are sent to the Babeitude Zone, take a BABE/HUNK card and place it into your base with the appropriate side facing front. Move out of the Babeitude Zone on your next turn.

Ģ RELEASED SPACE: When a player lands on this space, everyone trapped in the MONKEYS MIGHT FLY OUT OF MY BUTT space may leave on their next spin.

WAYNE AND GARTH ON THE VIDEO TAPE

2. WHOSE TURN IS IT?: Sometimes it may be hard to recall whose turn it was right before Wayne and Garth came on the screen. ThatÆs OK. Just do the best you can and keep play moving.

3. YOUR SPECIAL SOUND: A special sound effect corresponds to each playing piece. At the beginning of the videotape, the sounds will be played for you. Remember your sound! When you hear it, you will have to do something. Wayne and Garth will tell you what to do.

For example, in the beginning of the game, Wayne and Garth will tell you when you hear your sound to take a PARTY ON! card.

4. HE SHOOTS! HE SCORES!: When Wayne or Garth scream this out, or it is read aloud off a card by a player, grab one of your ōtrash pucksöand shoot at the goal. The first player to land a ōtrash puckö in the box first (bounce outs donÆt count), will get to do something Ś usually take a PARTY MAKER.

House rules on who scored first. No ties. DonÆt waste time arguing. The tape is rolling.

The winner is the first player to enter PARTY CENTRAL, on an exact spin count, with:
at least 5 PARTY MAKERS pieces
a BABE/HUNK
a Backstage Pass
and without the Grey Poupon jar!

If you have all the elements to win and spin a number higher than you need to enter PARTY CENTRAL on an exact count, just wait on your space until you spin what you need.

If a player does not make it to Party Central before Garth comes on and announces that the game is over, Garth wins. If one of the players wins, fast-forward the tape to the end and enjoy the last fun-packed minute of PARTY ON!

Losers must clean up the ōtrash pucks,ö mop up any hurl, refill the refreshments, get more munchies, and set up the game for another round of most excellent game play.

1. Everyone spins. The lowest number goes first. In case of a tie, spin again. The first player must take the Grey Poupon jar. Play continues to the left, clockwise.

2. If you have read all the rules and you have everything set up, put the cassette into your VCR and press PLAY.

3. Fans of WayneÆs World are encouraged to watch the enclosed videotape in its entirety, even if someone wins before the tape ends. In addtion to being a component of gameplay, the videotape is most excellent entertainment.

4. If there are fewer than 4 players, then certain play pieces will not be used. Any reference to unused play pieces on the videotape is ignored, just keep playing.