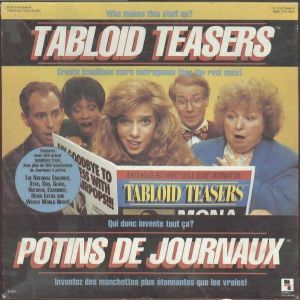 Move ahead on the game board by guessing the real headline, or by having other players pick your headline as the real one. The first player to receive at least one vote for his headline once he reaches the Finish space wins!

Each player takes a mover, the matching color voting die and an answer pad. Put movers on START. All players will need a pen or pencil.

Place the headline cards in the middle of the board so that the side with the incomplete headlines are face up. All players roll their dice; the player with the lowest number will be the moderator first. Players take turns as moderator in clockwise order.

Each headline is numbered 1, 2 or 3. When first playing, go through the cards using only the number 1 headlines. When all the l’s have been used, play with the 2’s and then the 3’s.

The moderator takes the folder and the top headline card. He reads the first incomplete headline aloud and all players -including the moderator - write down a word or words, to till in the blank and complete the headline. Try to complete it so the other players will think that your headline could be the real one.

When all players have filled in the blank, they pass their answer sheets to the moderator (make sure no one sees what you’ve written). The moderator randomly inserts each one (including his own and the real one, completed side up) into the numbered tabs inside the folder.

>READ ALL ABOUT IT!

The moderator holds the open folder in front of his face and reads all the headlines aloud by first stating the tab number and then reading the headline in that tab (i.e. Number 1: Space aliens mowed my lawn. Number 2: Space aliens look just like gophers, etc.).

After all the headlines have been read, players secretly vote for the one they think is the real one. The moderator does not vote. Players are NOT allowed to vote for their own headline unless it is identical (word for word) to another headline (see IDENTICAL HEADLINES).

To vote, players cover their die and turn it face up to the number of the headline they think is the real one. Keep it covered with your hand until it’s time to reveal the votes. NOTE: It there are six players, there will be a total of seven headlines. To vote for #7, players secretly remove their die from the table.

When all the votes have been placed, players uncover their die and the moderator announces the number of the real headline and reads it aloud. Players who have scored move ahead on the game board (see SCORING). The moderator returns all answer sheets to the players and places the used headline card on the bottom of the pile. The next player takes a new headline card and begins the next round as moderator.

Each player who votes for the real headline moves ahead one space.

If a player lands on the same color space as his mover, on his next turn, he doubles his score and moves ahead twice as many spaces.

If a player lands on the “EXTRA! You’re on a Roll” space, that player rolls his die and moves ahead that number of spaces on the board.

>ENDING AND WINNING THE GAME

Once a player lands on the Finish space (he does not have to get there by exact count), he cannot win until the next round. To win, at least one other player must vote for his headline as the real one.

Players stay on the Finish space until another player votes for their headline. More than one player can be on Finish at the same time.

If more than one player is on the Finish space at the same time and both or all of those players headlines receives the necessary vote to win, only the player whose headline receives the most votes will be the winner, If all players on Finish receive the same amount of votes, continue playing until there is a winner.

The only time a player is allowed to vote for his own headline is when it is identical (word for word) to another headline read aloud by the moderator. Scoring is as follows:

2. If any other players vote for either that player’s headline or the real one, those players move ahead 1 space. Of course, they also move the 2 additional spaces for every vote their headline may have received.

If you have any enquiries, please write to:

Proof of Purchase
Item No.3655