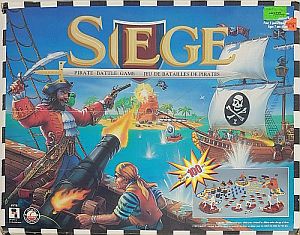 For 2 or more players
Ages 7 and up

Islands:
Carefully remove the island pieces from the sheets and position them as shown as shown in Figure 1. 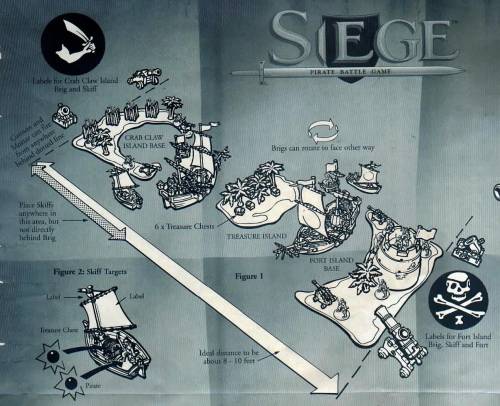 Skiffs:
Figure 2: Place labels on the sails, then assemble the sails to the Skiffs. 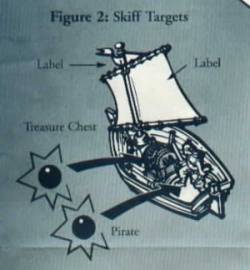 Figure 3B: Label the Brig Hulls.

Figure 3A: Assemble the Topmast by placing the opening of the smaller mast onto the nib of the larger mast and rotating to secure as shown. Place the Crow’s Nest onto the small mast. 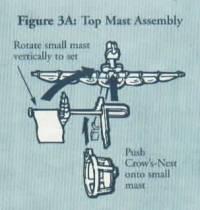 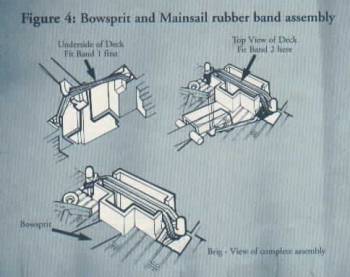 Place the topmast assembly into the ship, in front of the wheel 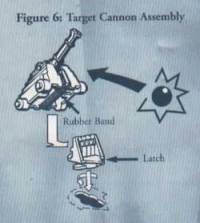 Other Components:
Latches: Assemble all the latches by twisting into place as shown in Figure 6.

Figure 7: Palm Trees - Assemble the tops of the trees to the trunks and place 3 palm trees on Treasure Island, 2 on Crab Claw Island and 1 on Fort Island. 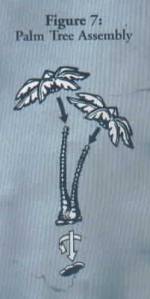 Figure 8: Fort: Label the fort and the pole. Assemble the rubber band to the fort as shown. Place the fort on Fort Island by aligning the notches at bottom to the slots in the board and gently twisting clockwise to lock in place. 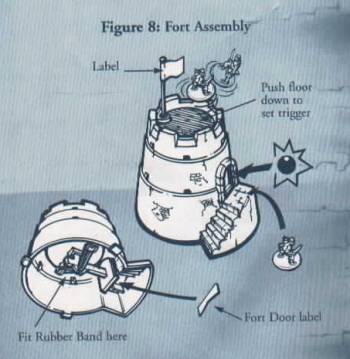 Palisades : Assemble the 4 Palisades by placing the rubber band as shown in Figure 5. Press the Palisades onto the latches on Crab Claw island by sliding them forward to lock into place. 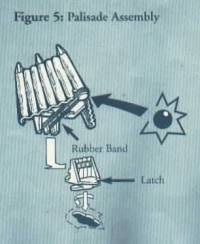 Figure 9: Shows how the Mortars work. Each player gets one Mortar. 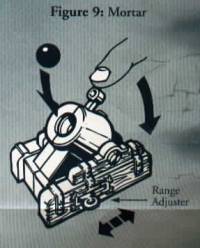 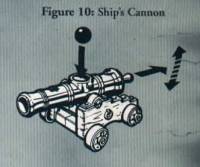 Set up the remaining pieces as shown in Figure 1.

Decide which player will go first. On your turn you roll the Pirate Dice to see how many Battle Points you get. For each Battle Point you get, you may:

You may do any combination of the above with as many Battle Points as you have rolled.

Firing Battleballs:
You may fire a Cannon or Mortar from any position as long as it is in line with the rear of your Island (see Figure 1). Firing one shot uses up 1 Battle Point.

You can fire at your opponent only if you have at least one Target Cannon that is not destroyed, no matter where it’s pointing.

Note: Players should stand off to the side, out of the range of the Cannon and Mortar while they are being fired.

Replacing Target Cannons:
The Skiff is only moved when going to Treasure Island to collect and return with a Treasure Chest, or replacing a Pirate on board. As long as you have a Pirate in your Skiff, you may take a Treasure Chest. This takes 4 moves (4 Battle Points) over 2 turns.

Turn 1:
Move the Skiff to the island (1 point) and place the Treasure Chest on board (1 point). Now wait for your next turn. You may use any remaining Battle Points to fire Battle Balls, as long as you have at least one Target Cannon left.

Turn 2:
Move the Skiff back to your base Island (1 point) and replace the Target Cannnon on either the Brig or Island Base (1 point). The Treasure Chest is now removed from the game (it’s empty!).

You may never have more than one Treasure Chest in your Skiff at a time. If your Treasure Chest is destroyed while in a Skiff (a direct hit knocking it out of the boat) that chest is taken out of the game. You may repeat the above sequence over 2 turns.

Moving Your Pirates:
Pirates always start the game on the spaces on the Skiff, Brig, Fort and on the marked spaces on the islands (see Figure 1). As the battle progresses, and pirates are knocked over, you may move pirates to any free space if you wish. It costs 1 Battle Point to move 1 Pirate.

Replacing a Pirate in the Skiff:
If your Pirate is knocked over in the Skiff, he must be replaced. This takes 2 points: 1 point to return to base and 1 point to put a new Pirate into the Skiff.

The Fort:
Once the Fort has been destroyed (a direct hit on the door), it is not reset, and Pirates are no longer put on top. However, if you wish, you may place a Pirate onto the top step in front of the Fort (this takes 1 Battle Point).

Palisades:
Each Palisade takes 1 Pirate. It is not replaced once it is destroyed. However, if a Pirate in a Palisade is hit without destroying the Palisade, another Pirate can be placed in it. This takes 1 Battle Point.

Eliminating Pirates:
Pirates are eliminated once they have been knocked over, even if they were hit by a falling target and not directly by a Battle Ball.

The Compass Symbol:
The number 3 on each Pirate die is shown inside a Compass symbol. If either of the dice rolled by a player shows the compass, this player must turn their Brig to face the opposite direction, allowing their opponent a chance to hit the Target Cannons on the other side of the Brig. This is the only time the Brig is moved. In addition, the player also uses the 3 Battle Points shown on that die. If a player rolls 2 compasses on the same turn, he can choose whether or not to turn his Brig.

If you have any inquiries, please write to

YOU MAY NEED TO REFER TO THESE INSTRUCTIONS AGAIN. PLEASE STORE FOR FUTURE USE.