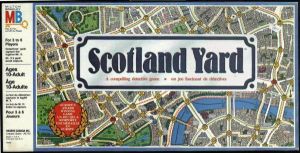 Mr. X, a most-wanted criminal, is on the run in Central London and Scotland Yard’s finest detectives are in hot pursuit. To escape capture, Mr. X must move cleverly and secretly (Mr. X’s whereabouts are revealed only as many as 5 times during the game); to corner Mr. X, the detectives must use ingenuity and cooperation.

One player is Mr. X. All other players are the detectives. Whether one is being chased or doing the chasing, all players travel from location to location by bus, taxi or underground. To take a certain form of transportation, you must be on the correct boarding spot and have the correct fare - no ticket, no ride!

If you’re Mr. X, you must avoid capture long enough for the detectives to run out of their fare tickets. If you’re the detectives, one of you must capture Mr. X by landing on the same space Mr. X occupies.


after the game is over, if there are any questions about Mr. X’s movements, the logbook entries can be checked location by location!