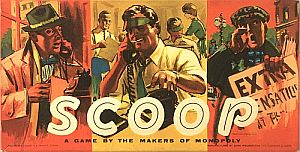 ôScoopö is an exciting game which can be played by two-five players.

THE OBJECT OF THE GAME is to completely fill a Blank Page of a newspaper with Stories and Advertiseşments of as high a value as possible. The total value of a full page can vary considerably according to the individual totals marked on the back of each Story card placed on the Newspaper Blank. The winner of the game is the player who composes the page amountişng to the highest value, taking into account the cheques held at the close of the game and other bonuses obştained (see Rule 11).

Telephone Device (Method of Use).

By moving the pointer to a number and returning it fully to the right, a signal will appear in the indicator space. Signals appear by chance, i.e. if one dials the same number more than once, the same signal does not necessarily appear, although, of course, it may do. During play, whatever signal is obtained must be obeyed according to the instructions given.

(1) Each player takes a Newspaper Blank and places it in front of him on the table. The sets of Story and Advertisement cards are set out in the centre of the table, values face down.

(2) Each player makes a Ĺtelephone callĺ to any number of his choice and the first player to obtain a ĹTriple Starĺ symbol is the dealer. If two or more ĹTriple Starsĺ come up in the first round of calls, the players obtaining them dial again until only one gets the ĹTriple Starĺ Symbol.

(4) To obtain a STORY, a player must collect three cards according to the indication on the Story space on his Newspaper Blank: the appropriate Reporter, a Photographer and a Telephone card. On completion of a set, the player puts them on the table, calls ĹSTORYĺ and makes a Ĺtelephone callĺ (dialling the number indicated on the telephone card) and thus gets the Editorĺs decision on his story, according to the symbol which appears. If the decision is favourable, he takes a Story card from the top of the relative pile and places it in position on his Newsşpaper Blank, throws his three cards onto the discard pile and makes up his hand FREE OF CHARGE from the stock pile. If the decision is unfavourable, he does not take a Story, but throws the three cards on to the discard pile and buys cards for ú100 each from the stock pile until he has three cards in his hand again. This he can do at will.

To obtain an ADVERTISEMENT, a player must collect the following three cards: Space Salesman, Artist and Advertiserĺs approval. No teleşphone card or Ĺcallĺ is necessary here and, as soon as a player has collected the three necessary cards, he can trade them in for an Advertisement, taking the top Advertisement block from, the pile of Advertisement blocks and placing it in position on his Newspaper Blank, again making his hand up FREE OF CHARGE.

ĹTRIPLE STAR STORIESĺ can only be obtained by a telephone decision.

If a playerĺis telephoning for a decision on a story and gets the ĹTriple Starĺ signal, he takes a ĹTriple Star Storyĺ in place of the one he was trying to obtain.

(5) At a playerĺs turn he may, after examining his cards, do one of the following:

(a) Change a card, by first throwing away and then taking the top card from the stock pile. This costs nothing. (At no time can a player change a card in his hand for the card face up on the discard pile).

(b) Put one or two cards out of his hand onto the ĹType Matter in Abeyanceĺ flap and buy one or two cards for ú100 each from the stock pile. The advantage of this being that it allows a player to have up to seven cards in his possession, though - as it will be seen, the cards on the Abeyance flap are vulnerable.

Once cards have been placed Ĺin abeyanceĺ they cannot be reşmoved until they can form part of a qualifying set of cards.

Note. Ś No more than three cards may be held in a playerĺs hand at once, although he may, at the same time, be making up two sets of cards on the Abeyance spaces. It must be rememberşed that each of the two sets of cards kept in abeyance must be relative to a particular STORY or ADVERTISEMENT, for inşstance, in one space a player can build up a set of cards for an Advertisement and in the other space a set of cards for a Crime Story. These spaces are not just for saving any cards.

(c) CLAIM A STORY OR ADVERTISEMENT:

(6) ĹSCOOPĺ Cards: These cards (there are three in the pack) are very valuable for the following reason. If a player, holding a SCOOP card, sees that another player has cards on his Abeyance sheet which he requires - providing he has the other card (or cards) of the set in his own hand or on his own Abeyance sheet Ś he may, when it is his turn, shout ĹSCOOPĺ, whereon he takes the card (or cards) he requires from his opponentĺs Abeyance sheet, adds the card(s) required to make up the set and his SCOOP card and proceeds as for a normal ĹStoryĺ (Rule 4). This procedure applies to SCOOPING Advertisement cards also.

(7) BANKRUPTCY: If a player becomes bankrupt at any stage of the game, he must turn over all the copy on his Newspaper Blank and allow any player (who wishes to do so) to offer for one of the Stories,ĺ at the value quoted on it. The bankrupt seller can choose his buyer (if there are offers for more than one card) and may sell as many, or as few cards as he wishes. For instance, in turning over his cards he may find he has the following:

and he may receive offers for all three cards. If he does, he may decide to accept the offer for the General Story valued at ú500 and keep the other two Story cards. If two players offer for the same card, the player whose turn would have been soonest after the present player, has preference.

If no player will buy from a Bankrupt, he must drop out of the game once he has no means of carrying on.

(When he has no cards left in his hand to play with and no means of acquiring any).

(8) SUBSTITUTION OF COPY: Each player may look at the value of his own Stories and Advertisements (without letting the other players see). If he has a low valued Story, he may substitute another Story for it, acquiring one by the normal method of play (i.e. collecting the three necessary cards). In this case, the Story he takes off his Newspaper Blank goes at the bottom of the appropriate stack. Should the new Story he obtains be of lower value than the one he already has, he can return that one to the bottom of the stack and keep his first one.

(9) TRIPLE STAR STORIES: It is possible to have two ĹTriple Starĺ Stories on a Newspaper Blank. They are acquired as explained earlier. One is compulsory and must be placed where indicated (top centre). The other is optional and can, if desired, be placed in the space marked for two ĹStarĺ stories instead of having two ĹStarĺ stories. In this case on obtainşing a ĹTriple Starĺ Story, any ĹStarĺ Stories already acquired can be replaced with this ĹTriple Starĺ Story. the ĹStarĺ Stories being removed and sold for their face value. The opporştunity of buying passes round from player to player in the normal sequence of play for one round only. If not taken up by any player during the round when offer is made, the player can keep the ĹStarĺ Story or Stories and include them in his total value at the end of the game, but at half their value.

This is the only time Stories can be sold, other than when a player is bankrupt.

(10) BLOCKING: In the play, a telephone call has to be made in connection with all Stories. Telephone calls can be Ĺblockedĺ by an opposing player throwing the cards he holds in his hand (he must have a full hand at the time, i.e. three cards) on to the discard pile and calling ĹLINES DOWNĺ. This can be very helpful in stopping a player completing his Newspaper Blank if he is dangerously near doing so. The player who is being Ĺblockedĺ must then throw in his set of cards (the set in connection with which he was about to make a call) and both players must make up their hands again by buying cards from the stock pile. This they can do at will as explained in Rule 4 for an unfavourable decision. Blocking can be done at any time.

(11) The first player to completely, fill his Newspaper Blank with copy calls ĹGONE TO PRESSĺ and the players each count up the value of the copy on their pages and add the value of the cheques they have left. The player calling ĹGONE TO PRESSĺ gets a bonus of ú2,500 for being the first Newspaper out with the news. The player having the highest total wins the game Ś this is not necessarily the player who goes to press first.

The storiesĺ used in this game are entirely fictious and no reference is intended to any actual person.