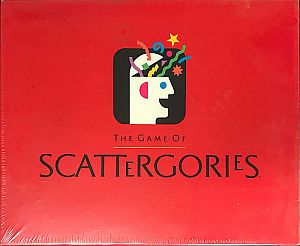 Quickly fill out a category list with answers that begin with the same letter. Score points if no other player matches your answers. Score the most points to win the game.

Do this for all 6 folders: Assemble an answer pad into a folder by sliding the cardboard backing into the slot. See Figure 1.

Then, slide a category card with List 1 behind the answer pad, as shown.

NOTE; Each folder should carry cards with Lists # 1 to 12 (3 cards per folder). You just inserted the first card. You can insert the other 2 cards per folder now for easy storage. 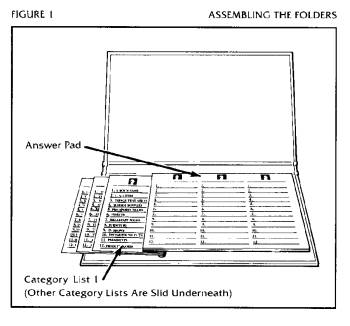 The game is played in 3 rounds. To play a round, do the following steps in order:

1. All players take a folder and a pencil. Make sure all players have the same List # faceup in their folder.

2. Setting The Timer:
Press down the STOP side of the timer switch. Turn the timer knob clockwise as far as it will go. See Figure 2. 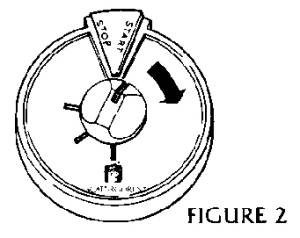 3. Set the die-rolling board on the table. One player rolls the letter die on the board and calls out the rolled letter. The rolled letter is the key letter that will be used in this round of play.

Caution: The 20-sided die is heavy. Roll it only on the die-rolling board to prevent possible damage to table tops.

4. One player presses down the START side of the timer switch and the round begins.

5. All players quickly fill in the first column of their answer sheets. Answers must fit the category and must begin with the key letter rolled. (See Rules For Acceptable Answers on the back of the card.) 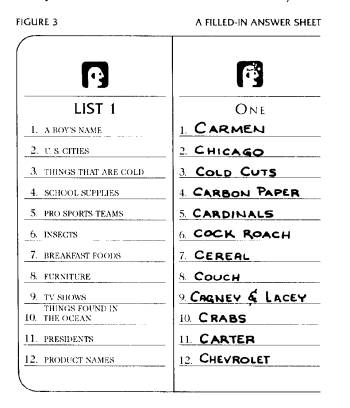 6. When the timer stops, players must immediately stop writing.

7. Scoring A Round: Players, in turn, read their answers aloud for number 1. Players correct their own answer sheets by circling an acceptable answer that DOES NOT match any other playerís answer. Continue reading answers until all 12 categories have been scored. Then, score 1 point for each of your circled answers. Record your score at the top of the column of your answer sheet, as in Figure 4. 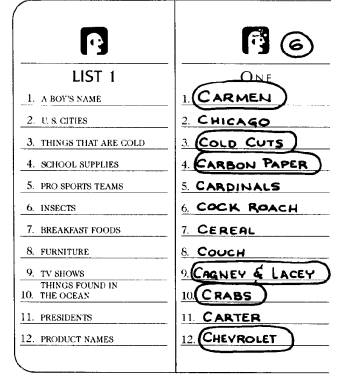 Starting A New Round: Set the timer again, roll a new letter and continue playing using the same category list as you did in the previous round. Fill in the next column with your new answers. NOTE: If the same letter is rolled twice in a game, reroll the die for a different letter.

After 3 rounds have been played, all players total the 3 scores on their answer sheets. The player with the highest score is the winner. See Figure 5 for fully scored sheet.

In Case Of A Tie: The players who tie play one more round with a new letter. The player who has the highest score in that round is the winner. 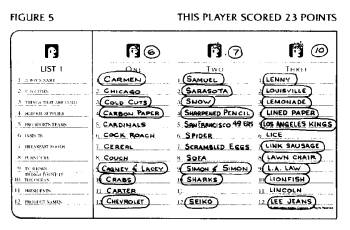 Rules For Acceptable Answers
ï The first word of your answer must begin with the key letter.

ï The exact same answer CANNOT be given twice in one round. Example: You cannot answer Daisy for a Flower and also for A Girlís Name.

ï Creative answers can be acceptable. For example, you could answer Knuckle as a kind of Sandwich. But if one player challenges the answer, the group must vote on its acceptability.

To start a new game, remove the category card in your folder and turn it around. Then insert it into the folder again with a new list faceup. If both lists on one side of the card have been used, flip the card over and use the lists on the back. Make sure all players are using the same List #

ï Extra Points: When answering with proper names or titles, score an extra point for using the key letter more than once as a first letter in your answer. For example: Ronald Reagan. Carson City, Simon and Schuster, and The Brady Bunch for 2 points; Hubert Horatio Humphrey for 3 points.

ï Time Challenge: There are 3 yellow marks on the timer. For a more challenging game with less time, set the timer at any one of these marks.