Welcome to the land of sunshine, palm trees and yep, you guessed it, those oh so cool California Raisins Raisins are coming to Hollywood from all over California to be singing and dancing stars. In fact ‘conga’ lines of raisins can be seen all over the city. But which raisins will hit the ‘big time’? ft’s all timing in Hollywood. Be the first player to get your quartet on center stage and your four raisins will be the ‘stars’ of the show.

One far-out gameboard with revolving stage and spinner, rules, 16 cool playing pieces (four of each color), and 1 raisin storage box.

Object of the game:

To be the first player to get all tour of your California Raisins on to center stage. 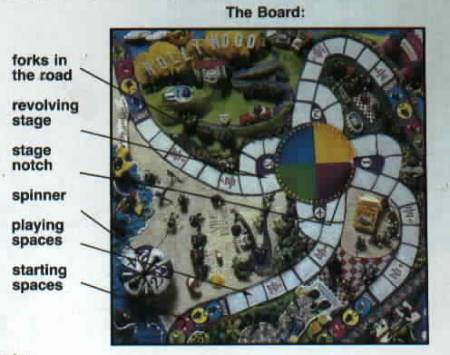 Set the stage notch to any number to begin the game.

The youngest player goes first. Players take turns in a clockwise direction. When it is your turn, spin the spinner. Using the number given on the spinner, choose one of the following moves:

1. move any one of your playing pieces the given number of spaces or;

2. turn the stage notch to the given number.

1. When moving out of the starting space, count from the first white space regardless of where your playing piece is in the ‘conga’ line.

2. Playing pieces can move forward or backward at any time but not both directions in one turn.

3. All of your move number must be made by one playing piece. For example, you cannot spin a four (4) and move one piece three (3) spaces and another piece one (1) space.

4. If it is impossible to move the stage, you must must move one of your pieces, even if it means moving your piece backwards (younger players may have the option of passing a turn if they cannot move forward nor turn the stage).

5. Two playing pieces cannot occupy the same space at the same time. If you land on a space occupied by another playing piece, the other player’s piece is ‘bumped’ back to the starting space of that track. Playing pieces are never bumped to a different track.

7. You can only have your raisins jump on to the stage section that matches the color of your playing pieces. For example, a red playing piece cannot jump on the yellow, blue or green parts of the stage. The stage is counted as one space-the same as each space on the track.

8. Some spaces on the board tell you to move a certain number of spaces. When you land on such a space you must move your piece as directed.

Be the first player to get your raisins on to your stage color and you win the game (singing and dancing is, of course, optional).

• ‘Bumping’ playing pieces back to the starting space can be handy when one of your opponents is getting ahead or when one of his or her raisin’s is close to getting on the stage.

• ‘Rotating the stage’ is necessary to get your raisins on stage since you can only jump on your color. It can also be used as a defense by turning the stage away from another player’s piece that is close to ‘jumping on the stage’. Of course, when you turn the stage as a defense you use up your move at the same time.

• You may use any fork in the road on the track when approaching the stage. Keep in mind that every color on the stage is always next to two tracks at the same time.