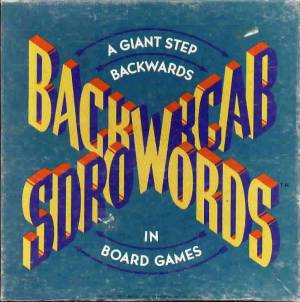 A Giant Step Backwards in Board Games!

BACKWORDS combines the luck of the dice plus the strategy of moving on the game board with the skill of being able to pronounce words backwards.

Be the first player to attend the “University of Reversity” and have no EXAM cards.

1. Separate the BACKWORDS cards and EXAM cards into “easy” and “hard” decks. The “easy” BACKWORDS cards are the red ones; the more difficult words are the blue cards. The “easy” EXAM cards are the ones with the yellow “EXAM” letters in the red circles, and the “hard” cards have red letters in the yellow circles. Decide which level you are going to play. Then place either the two “easy” decks or two “hard” decks face down on the two rectangular areas on the board. (Note: It may be easier to use about half of each deck at a time.)

2. Each player should take one EXAM card from the deck without looking at it. Always keep EXAM cards face down in front of you — they will be used to “test” you when you reach the University of Reversity.

3. Have each player choose a colored pawn and place it at “Start".

4. Have the timer handy. It will be used when players reach the University of Reversity.

Choose a player to go first and the order of play (right to left or left to right). On your turn, you will roll both dice at the same time. (Note: The dice should not be moved until the turn has ended completely.) You will move in one of the following ways:

1. If any color is rolled on the BACKWORDS die, you move your pawn either forwards or backwards (your choice) the number rolled on the regular die. You then draw a BACKWORDS card from the deck and read out loud the section outlined by the color shown on the BACKWORDS die. For example, if you roll a red and a four, you would move four spaces in either direction, draw a BACKWORDS card, and read the clue and backwards word in the red box (see “BACKWORDS Cards”).

2. If “EXAM” is rolled on the BACKWORDS die, you move either forwards or backwards the number of spaces indicated on the regular die, and then take an EXAM card, keeping it face down in front of you. DO NOT LOOK AT YOUR EXAM CARDS! Remember, you will be “tested” on any EXAM cards you hold when you reach the University of Reversity.

3. If “BACKWORDS” is rolled, you must move your pawn backwards according to the number shown on the regular die. You do not draw a card.

Yellow Spaces
If you land on a yellow space, take an EXAM card from the deck without looking at it and pass it face down to the player of your choice. Remember, players do not look at their EXAM cards.

If you land on a yellow space which is occupied by another player, give that player one EXAM card from your holdings (if you have any). Also, take an EXAM card from the deck (without looking at it) and pass it face down to the player of your choice.

Each BACKWORDS card has three words written on it backwards (with phonetic spelling as well). The card also has a category clue and shows the correct (normal) word.

When you pick a BACKWORDS card, you read the section of the card outlined by the color that matches the color you rolled on the BACKWORDS die. First read the “Clue” out loud to all the other players. Then read the backwards word. The other players will try to figure out what the frontward word is. You may repeat the word backwards as often as necessary.

The first player to shout out the correct frontward word moves his or her pawn either forwards or backwards, player’s choice, the number indicated on the regular die (the number you rolled). You act as “judge” if there is any question as to which player shouted the correct word first; in case of a tie, you should read another word from the same card to the tying players. After play place the BACKWORDS card face down under the BACK-WORDS deck on the board.

Palindromes
A palindrome is a word that is spelled the same forwards and backwards (such as “deed”). If the word read out loud is a palindrome, then the first player to shout “BACKWORDS” gets to move his or her pawn either forwards or backwards the number of spaces shown on the die. With a palindrome, calling out the word itself (such as shouting “deed”) does not count.

There are three ways to get rid of EXAM cards:

2. If you are in the University of Reversity and are the first player to call out the correct BACKWORDS word read by another player (see “BACKWORDS Cards”), give one of your EXAM cards to the player of your choice.

3. When you are in the University of Reversity and it is your turn, choose an opponent to “test” you with your EXAM cards. Give that player all your EXAM cards face down and start the time by inverting the sand timer. You will have about 30 seconds to get rid of as many of your EXAM cards as possible. The tester with your EXAM cards takes one card at a time and reads the word on the card in its normal (forward) fashion. As soon as you correctly pronounce that word backwards, the tester quickly reads the next card. The player reading the card is the “judge” as to whether or not your pronunciation is correct. Place each used EXAM card aside. Continue discarding EXAM cards by correctly saying the words backwards until the timer runs out.

(Note: If the players are of different skill levels — for example, if adults play with children — you may choose to play with both the “easy” and the “hard” EXAM cards, using the "hard” deck during the game but allowing the less skilled players to trade in their difficult EXAM cards for easier ones when it’s their turn after reaching the University of Reversity.)

There are actually two ways to win BACKWORDS:

1. Arrive at the University of Reversity wihout any EXAM cards, or

1. It is often wise to move backwards if the move will enable you to land on an opponent’s space; then you can get rid of one of your EXAM cards by giving it to that opponent.

2. Some words may have prefixes or suffixes added to them. It is helpful to remember what some prefixes and suffixes sound like when read backwards. For example, BACKWORDS words beginning with “lluf,” or “elbi,” or “gni” will, when read in their normal form, end in “full,” “ible,” or “ing.”

3. When reading a word backwards, or in judging a word that has been read backwards, remember that there is not just one acceptable form of pronunciation for that backwards word. For instance, vowels may change from “long” to “short” or vice versa when a word is read backwards. For example, “Satan” backwards (NATAS) would probably be pronounced NAH-TAHS, but NAY-TAHS, NAH-TAYZ, and even NAY-TAYZ would also be acceptable.


Team Play
Teams can play in one of two ways:

1. Teams are decided upon in advance, and each player controls a pawn. The rules are exactly the same as in the regular game except that a team does not win until all players have entered the University of Reversity and disposed of all their EXAM cards. Naturally, players on the same team will avoid giving EXAM cards to their teammates.

2. Each team uses one pawn, and the team players hold their EXAM cards jointly. If any player on the same team is the first to correctly identify a BACKWORDS word, then that team gets to move its pawn. In the University of Reversity, team players must alternate pronouncing each EXAM word backwards.

Now it’s time for your first BACKWORDS game.
YDAER? NIGEB!
If you have any fun words or palindromes which you wish to have included in future supplemental card packages, please send them to us at the address below: